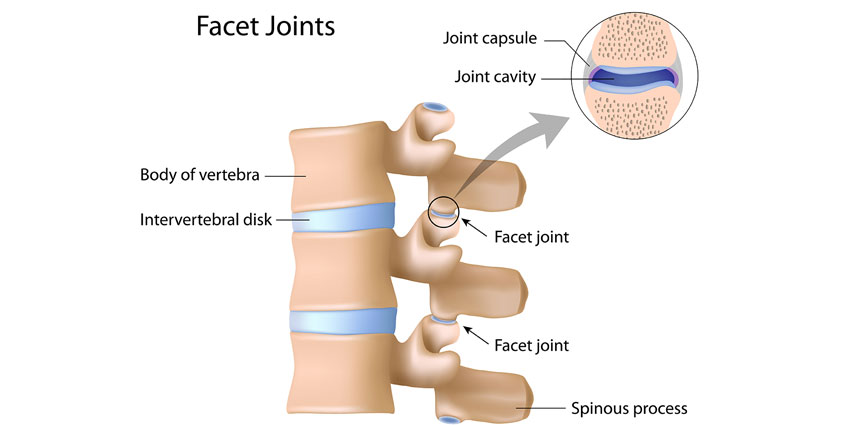 The facet joints make up part of the three joint complex which governs movement in each motion segment of the spine. This three joint complex is made up of the intervetebral disc (IVD) and the posteriorly positioned facet joints, one left and one right. For an overview of spinal anatomy please view my earlier blog The Spine. (link).

Just to recap, a motion segment is made of two adjacent vertebrae, the bones which are stacked on top of each other separated by the IVD anteriorly and the facets posteiorly. These posterior facet joints, also known as zygaphopseal joints, take on spefici characteristics dependant on the region of the spine in which they are found, the cervical (neck), thoracic (rib cage) or lumbar (low back). The forth area of the spine, the kyphosis through the sacrum and coccyx does not have facet joints as typically these segments are fused together during foetal development to form a single boney entity. 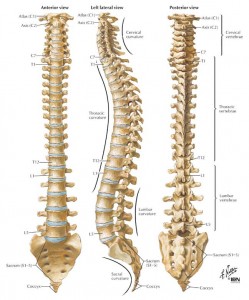 Basic anatomy of the facet joint is like most other synovial joints in that it has two joint surfaces which articulate together to allow a given range of motion about that joint. The shape, contours and location of the joint often dictate the range of motion. Each joint surface is lined by synovial cartilage with a joint capsule surrounding the entity. The facet joints are there to stabilise the spine in compression, prevent excessive bending and translation (gliding movements) between adjacent vertebrae (Adams, Bogduk, Burton and Dolan, 2006). These joints therefore play a major role in the preservation of ‘normal’ range of motion about the spine, however the shape, size and orientation vary between the different regions of the spine, and they therefore have slightly differing roles within these regions.

As you can see in the image above cervical facet joints, found in the neck, allow flexion (forwards), extension (backwards), rotation and lateral flexion (side to side) to occur, this is mainly due to orientation of the articular surfaces, these joint surfaces lie approximately 45⁰ to vertical, with anterior (front) being higher than the posterior (back). These joints throughout the neck are expected to bear the weight of the head along with the vertebral bodies and the IVD, for this reason these joints are susceptible to degenerative changes. 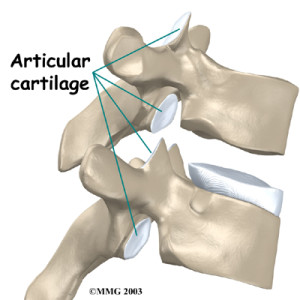 The facets joints found in the thoracic spine, see above, are almost vertical in orientation, with the lower facet articular surface of the superior vertebrae facing forward and the upper facet of the inferior vertebrae facing backwards, however the nature of the thoracic spine means there is large variation in this orientation dependent upon the location of the motion segment. This generic orientation allows for axial rotation, however during bending forwards and rotation the facet joints are heavily loaded despite the vast majority of the body mass load going through the IVD and vertebral bodies. 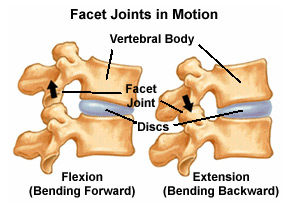 The facet joints found in the lumbar spine are the largest and are true synovial joints (MIddleditch and Oliver, 2005), however they do allow small gliding movements making them diarthrodial. The orientation of these facet joints allow for bending forward and backwards, however limit rotation. This is because the upper articular surface of the lower vertebrae face inward, while the lower articular surface of the upper vertebrae face outward.

One thing which all facet joints have in common is that they are richly innervated with a variety of receptors and nerve endings continually creating a feedback loop with the central nervous system with regard to the position, load and mechanical wellbeing of the joint. These receptors can be broken down in to mechanoreceptors, of which there are 2 sub types found in the facet joint, and nociceptors.

Mechanoreceptors are biological transducers that react to mechanical stimulus, i.e.loading, then converting this stimulus to electrical impulses transmitting the information to the central nervous system (Middleditch and Oliver, 2005). Type I receptors have a low stimulus threshold and play an important role in proprioception in both static and active joints, while type II receptors are sensitive to acceleration and deceleration, and therefore fire at the start and end of movement. Both type I and II have a role in pain suppression.

Nociception is basically pain sensation. Within the facet joint there is a relatively large plexus of nerve endings which are difficult to stimulate and it typically takes high mechanical stress’ to activate these, things such as abnormal posture, fractures or dislocations. These nerve endings can also be stimulated by chemicals which are released in an acute chronic inflammatory response. These nerve endings are not only found in the facet joint but also throughout all the tissues which form the spine and its supporting structures.

It is clear to see from the above that the Facet joints have strong innervations from nerves receptive to mechanical and chemical stimulus, this in turn means that any altered loading, i.e. during injury and/or changes in chemical environment i.e. during inflammation, means these joints are a prime pain generator among the common causes of back pain. However this blog has really just scratched the surface of the anatomy which contribute to the functional motion segment, as we have not really touched on the muscles, tendons, ligaments or fascia, which are all, again richly innervated providing feedback to the central nervous system with regard to position, load and mechanical wellbeing of the individual motion segment and the spine as a whole functional unit!